How to Choose a Ceiling Fan 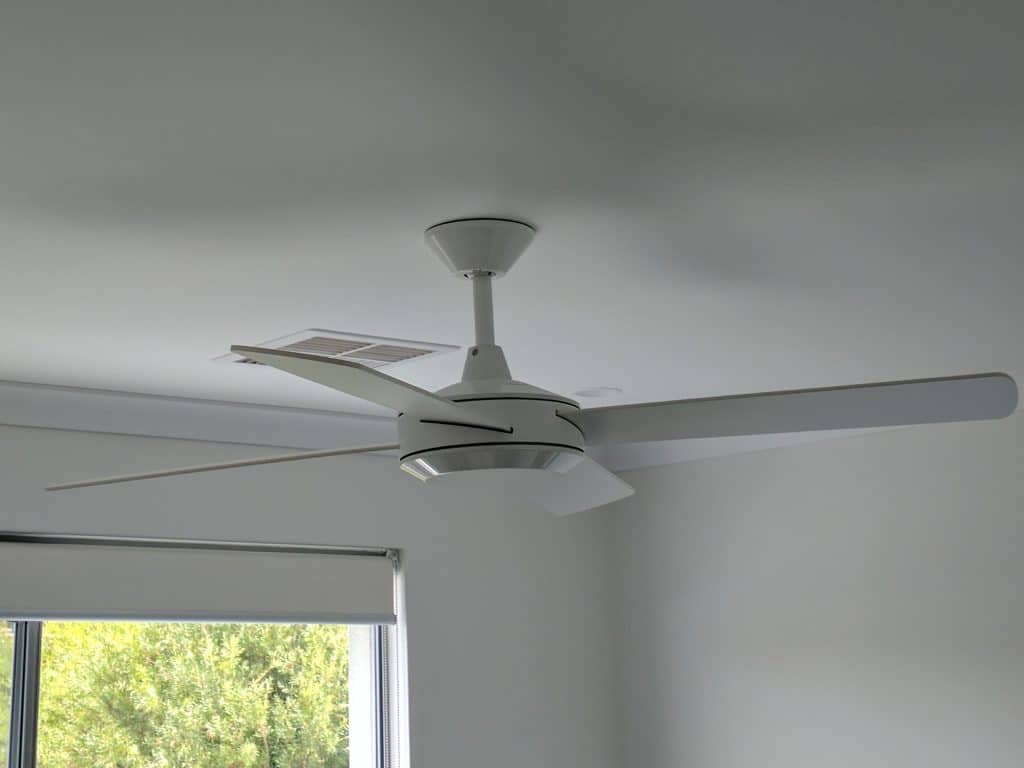 A ceiling fan can be an affordable and attractive addition to your home. While not as effective as modern air conditioning, ceiling fans have their own benefits to consider, particularly their low power consumption and aesthetic appeal. We’ve produced this unbiased guide to help homeowners decide which ceiling fan will be suitable for their home.

Where should a ceiling fan be placed?

There are also environmental circumstances to consider. Some fans are only suitable for indoors, while others have added corrosion protection and may be installed outdoors. If installing a ceiling fan outdoors in a coastal area, be sure to select a ceiling fan made of 316 stainless steel. In coastal suburbs of Perth such as Fremantle, Cottesloe and Scarborough, we’ve seen rust appear on ceiling fans within a matter of months.

How do you know what size fan to buy for a room?

Determining the size of ceiling fan required is quite simple. Please refer to the below table for sizing requirements.

Does my ceiling fan need a light?

Unsure whether your ceiling fan will need to include a light or not? As ceiling fans tend to be installed in the same location as light fittings (the center of rooms), it can be ideal to combine them into one point. For small rooms, the light fittings that come included in ceiling fans is usually enough light. In larger bedrooms, living areas or outdoor areas, the ceiling fan light will almost certainly not be enough light. In these cases, downlights are a good idea.

Until recently, homeowners had to decide whether their ceiling fan will include either a halogen, fluorescent or LED light. Due to recent advances in LED technology, you should not opt for anything other than an in-built LED light. They produce better light, use less electricity, last far longer, and are much safer.

There are two types of ceiling fan motors, AC (alternating current) and DC (direct current). AC fans are the traditional fan motors and still the most common, while DC have only recently been made popular. We’ll avoid the technical talk in this guide, and instead only refer to the differences between the two.

What types of blades can ceiling fans have?

There are several different blade types that come with ceiling fans. The most common are metal, wooden and plastic.

Metal ceiling fan blades produce more air noise than other blade types. Therefore they are only recommended when you require the classic brushed metallic appearance of ceiling fan. A good example of this is in alfresco and other outdoor areas, where a stainless steel ceiling fan is strongly recommended.

Plastic ceiling fan blades have the benefit of being both light and naturally corrosion resistant. They are available in many different styles, some of which are very quiet.

How many blades are best on a ceiling fan?

It doesn’t matter, honestly! Most ceiling fans come with 3 to 6 blades. In the end, choose whichever number of blades you think looks the best.

How can you control the speed of your ceiling fan?

Ceiling fans can be controlled by either wall control, remote control or a pull cord.

Wall controls are the most common, however they are difficult to install and are generally unattractive. Their benefit over remote controls is that they won’t get lost, especially useful in children’s bedrooms. To reverse the direction of the motor, you’ll need a step ladder to flip a switch on the ceiling fan itself.

Remote controls are increasing in popularity, and for good reason. You often have a greater range of fan speed options, can reverse the fan without requiring a ladder, can turn on the fan light using the remote, and can set a timer (for example, turn off automatically after one hour of usage. Great for kids bedrooms, or when going to sleep in summer). Ceiling fans on a remote are also easier to install. The downside is that, like car keys, ceiling fan remotes can easily get lost if not placed in a regular location.

Pull cords on ceiling fans are uncommon, though we have installed a few of these. They don’t offer any benefits over wall controls or remote controls, and would only be suitable for cases where the installation of a wall control is not practical, and the homeowner would rather not use a remote control.

How high should my ceiling fan be?

In Australia, ceilings tend to be at heights of 2.4m, 2.7m, or occasionally as high as 3m. If your ceiling is higher than 3m, an extension rod will be required. These can be purchased from the ceiling fan manufacturer.

The blades of the ceiling fan should not be less than 2.1m from the floor. This is an important consideration when selecting a ceiling fan for rooms with a ceiling height of 2.4m. Low profile ceiling fans are available, but these should only be purchased when required and not for their appearance alone, as they are more expensive and typically less effective.

Below are some other points to consider when deciding on which ceiling fan to purchase:

Where is the best place to purchase a ceiling fan?

Be sure to research different models of ceiling fans before deciding to purchase one. Look at the feedback other consumers have had, and whether the manufacturers have honoured their warranty on failed products. Don’t be afraid to purchase products online. We’ve found online retailers often have comparable or even better service than brick and mortar stores.

Be automatically notified of all new posts. No spam. No annoying marketing emails.

Please complete the contact form, and an electrician will be in touch shortly.